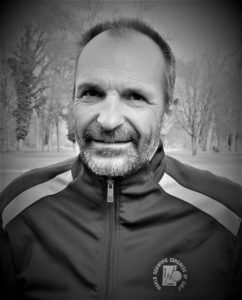 My Name is Stephane Barras. I was raised in Crans-Montana Switzerland home of the Omega European Master which is organized by my relatives.

My great Cousins, Géo and Guillaume Barras were part of the foundation of the Swiss PGA back in 1943. My late Father Roger Barras caddied for the 1952 Swiss Open Champion: Ugo Grappasonni. Later, he became a Swiss Golf Champion himself.

I was fortunate to learn from some of the best teachers in the world: John Redman, Gary Wiren, Mike Hebron, Bill StrausBaugh. I shared students with David Leadbetter and Alan Thompson currently coaching Tommy Fleetwood. In addition, I spent some years in Titusville FL practicing with golf legend “Feel of Greatness” Moe Norman.

1995 – I published the golf manual “The Difference” and in 2009, n.1 Chinese Player Zhang Lian Wei invited me to China to be his coach. In response to Golf being included in the 2016 Olympics, we launched the project “Par354”. That led me to become the head of Haigang Golf at the Olympic City in Kunming. Later, I assisted some leading Chinese players, such as Wu Ah Shun and Li Hao Tong (Both represented China in Rio Olympic Games 2016).

2011 – Over a period of 6 months, 3 continents and 13 tour events, I began research on “Putting Perception and Goals” where I would either monitor, coach, interview and/or caddie 45 Tour pros. Among the players I interviewed or monitered were Luke Donald, Lee Westwood, Ian Poulter, Justin Rose (Rio Gold Medalist), Jim Furyk, Michelle Wie and Dustin Johnson.

2012 – I was invited in USA at the World Scientific Congress of Golf (Phoenix AZ) to present the research. This research was later published in the International Journal of Golf Science as a result established the “PuttZones” system.

2013 – We launched #CaddiePlayer – a pratical solution from the research. The first commercial CaddiePlayer Client was European Tour Player Emiliano Grillo, from Argentina. After just one week of CaddiePlayer & PuttZones instruction, Emiliano was the clubhouse leader at the Dubai Omega Master 25th Anniversary. Since then he has qualified for the PGA tour.

2016 – together with quadruple Swiss Champion Karim El Baradie, we presented at the Universtiy of St-Andrews in Scotland, an Abstract about the “4shotsRule”. Since then, it has become a key data in performance optimizing, (World Scientific Congress VII).

Today, I call myself a “Performance Optimizer” and use special technics to save players shots, thus improving their results. My moto is “Raising Together” in a process to believe it works until it works to believe.